Type your search terms above and press return to see the search results.

Hawaii is deemed the birthplace of modern surfing. There is no place in the world where the waves break as regularly as here. There is no place where surfing is such an integral part of a peoples’ history and culture. Hawaiians have used wood and boards to glide through the ocean for ages. No place in the world would be better to learn how to surf.

In part 1 of the Anemina Travels mini series about surfing in Hawaii I told you the history of surfing in Hawaii. In part 2, I’ll show you the best surfing spots for beginners and advanced surfers on Oahu, Maui and the Big Island and reveal the spots where you can watch professional surfers exercising.

Did you already feel like you need to get your feet on a surfboard last time? Perfect, then, let’s hop on that surfboard right away! 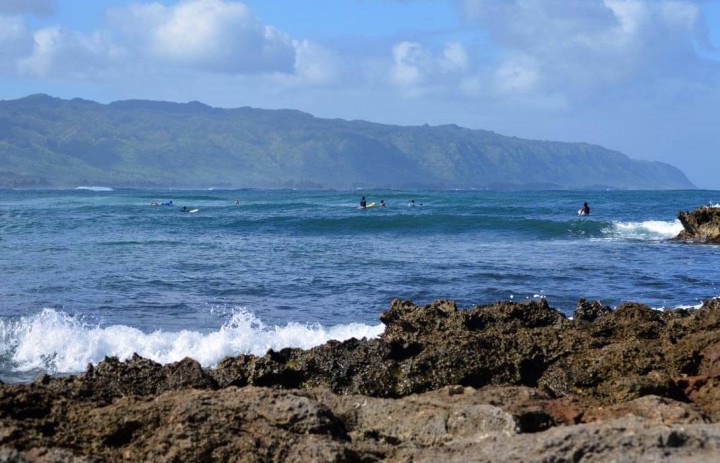 Hawaii offers perfect conditions for everyone – not least because it consists of several islands with a quite long coastline facing every direction. Every direction brings different conditions.

Beginners will be most comfortable with waves on the south shores while advanced surfers and professionals will favor the northern shores. The only exception is Big Island where the best waves can be caught in the east and in the west. Since I don’t want you to waste time finding the best places to surf (because you want to spend your time on your surfboard, right), I am going to reveal my favorite spots on Oahu, Maui and the Big Island to you.

The Best Surf Spots on Oahu

Like the most visitors you’ll probably arrive in Honolulu and stay there for a few days until you hop off for the next island. Waikiki, the tourist centre of Honolulu is rather crowded, especially in high season, but it is the perfect place to get used to the island style and get rid of your jetlag if you have one. Since no hotel is situated too far from the beach you could just as well start your surfing holiday here. There are a couple of surf shops and board rentals on the beaches where you can get a board or ask for an instructor. If you don’t happen to be a super early bird, keep in mind that it can become quite busy on the beach and in the water as well.

If you don’t favor crowds (I don’t like them for sure), drive up to the North Shore. I know I said that the North Shore is for advanced surfers but still there are some places where beginners can catch waves as well. Namely: Haleiwa. Haleiwa Beach Park is situated south of Puaena Point and therefore protected from the worst swell. Perfect conditions for beginners! The entry into the sea is a bit rough and rocky in a great part of the bay. Walk in the direction Puaena Point until the bay takes a sharp bend to find a sandy entry if you don’t have reef shoes.

Best Place For Watching The Pros on Oahu

Hawaii’s most famous surf spots line up at Oahu’s North Shore: Waimea Bay, Banzai Pipeline or Sunset Beach, to name the best. You don’t even need much luck to watch professional surfers practice here. These spots are so dangerous that even advanced surfers have trouble surfing them. An extremely flat reef, dangerous currents and fast waves demand for extraordinary skills.

Think about coming to the area in November or December when the North Shore hosts the Vans Triple Crown of Surfing – one of the best known contests in the world with the world’s surfing elite competing.

Must-See: The Triple Crown of Surfing at Oahu’s North Shore

If you want to learn or practice kite surfing, head to Oahu’s East Shore. Conditions are perfect in Kailua – for surfing as well as for watching.

The Best Surf Spots on Maui

Maui is surfer’s paradise from a picture book. On Hawaii’s second largest island, everybody is chatting about swell and wave heights all day long. Maui is especially famous among surfers for two spots: Ho’okipa, presumably the most famous wind surfing spot in the world, and Jaws.

In Jaws, waves get as high as 65 feet and reach a top speed of 31 miles per hour after a decent winter storm on the Pacific. Jaws is also famous for tow-in surfing. Most surfers don’t master the waves by muscle power only but with the power of a jet ski.

Beginners find better conditions in Kihei and Lahaina. The best place to get some practice is south of the Kamehameha Iki Park in Lahaina. You’ll find some surf schools there, among them Maui Surf Clinics where I learned how to surf myself – and which I can strongly recommend (no, they aren’t paying me).

The Best Surf Spots on the Big Island

Contrary to Maui and Oahu, Big Island is rather famous for its active volcano and incredible climatic diversity. The largest island of course has the longest shoreline but there aren’t many places for beginners. The coast is rough an the reef is much younger than on the other islands. Which makes it uneven and hard to assess. The entry into the water is pretty difficult almost everywhere.

Good News: There are some spots for beginners! Most notably the bays around Kailua-Kona on the West Shore, of which I would like to recommend Kahalu’u Bay. It’s a small bay south of the city center of Kailua-Kona that isn’t particularly crowded and into which waves roll quite regularly. If you like to ride bigger waves you need to get out a bit and if you prefer smaller waves you can catch them from near the beach. There’s a surfboard rental just across the street. The entry is rocky and the bay is shallow so you should consider wearing reef shoes.

A little further north is White Sands Beach that is also called Magic Sands Beach because it always changes size. Unfortunately, it’s always smaller than its pompous name suggests. The shallow sandy bay is perfect for body boarding. And it’s the ideal place for you if you don’t dare to surf properly (yet).

What are your favorite surf spots on Hawaii?

Did you miss part 1? Read it here: On The Trails Of The Duke: A Short History Of Surfing.

Did you ever wonder how expensive Hawaii actually is? This detailed analysis shows the costs of traveling to Hawaii – on a three week itinerary.

Apart from surfing, there’s another reason why you must visit Maui: The Road to Hana, America’s shortest road trip (and certainly the only one that spans across a tropic landscape). Road to Hana, Hawaii. Or: The Shortest Road Trip

If you do drive the Road to Hana, don’t miss these: 5 places you need to see when driving the road to Hana

Your thoughts are welcome!